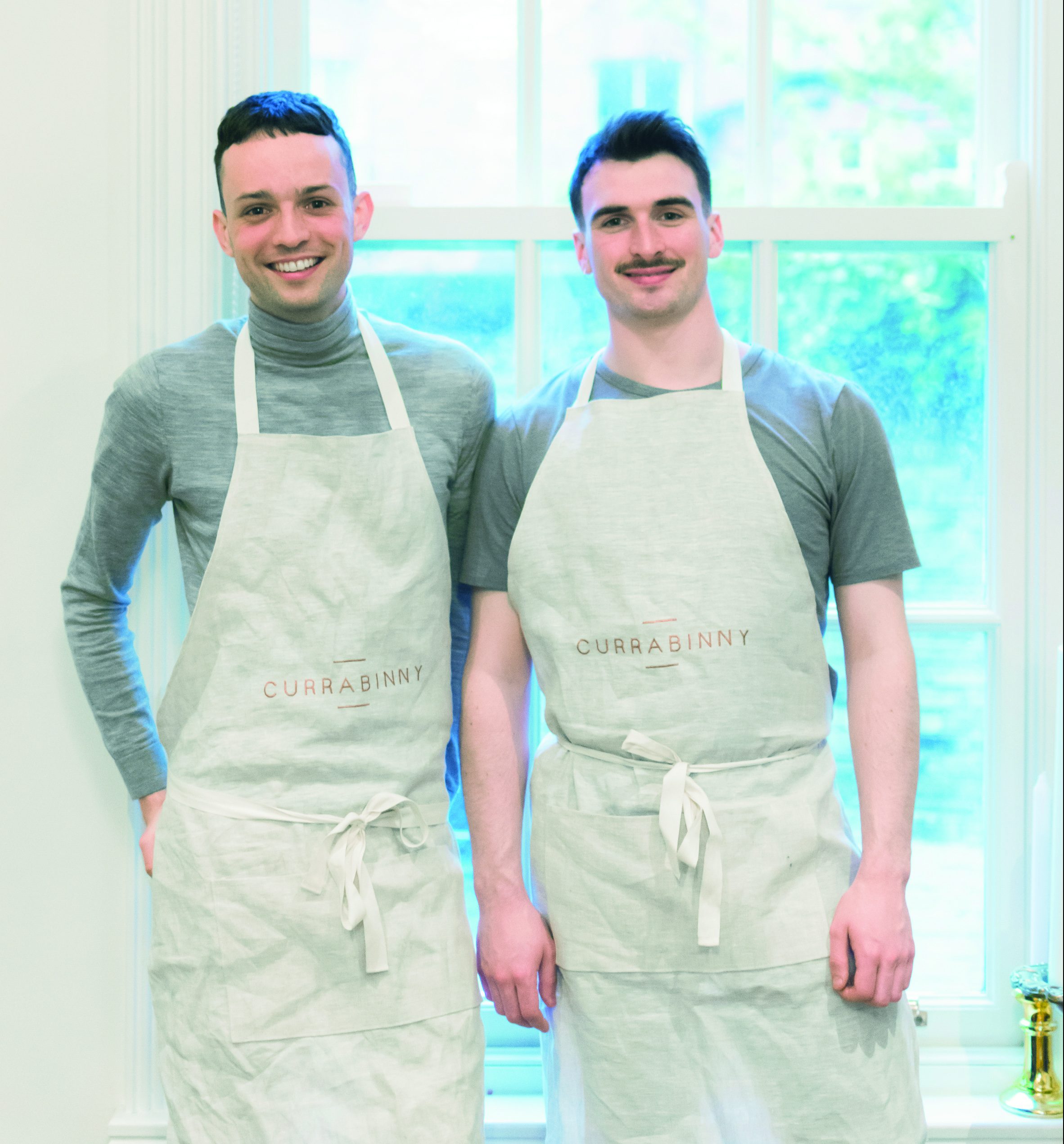 William Murray & James Kavanagh gave birth to Currabinny after a discussion on how they could turn their unwavering obsession (food) into a career. William studied & grew his love of food at Ballymaloe Cookery School in Co. Cork – which is headed up Darina Allen & Rory O’Connell. In Ballymaloe, William nurtured his love of dishes that are unashamedly created with lots of real butter, Maldon Salt & seasonal, fresh vegetables. James comes from the other side of the food world; marketing. Having worked for two of his favourite Irish brands; Kerrygold & Barry’s Tea, he has learned what goes into making a beautiful product. Witnessing the passion & quality that goes into making a Barry’s teabag, and how the perfect grass has to exist in order for Kerrygold Butter to be as delicious as it is, has strongly influenced his food ethos. Currabinny is named after the sleepy, picturesque area of Cork William was raised in. With houses right on the water and a warmer climate than most areas of the country, his childhood was surrounded by organic, self-grown food. Mackerel fishing on the pier & vegetable-patch tending is second nature to William.

This middle-eastern inspired dish is a perfect meat-alternative that won’t disappoint on texture and flavour.

Slice the Aubergine and arrange on a roasting tray, season and drizzle with olive oil. Roast for roughly 20 – 25 minutes.

In a bowl whisk the mayo, tahini, lemon juice, garlic, salt and tabasco until creamy, add more lemon juice if the mixture is too thick.

Slice the Halloumi and pan fry until golden on both sides. I like to squeeze some lime juice over the halloumi while I fry it.

Toast the burger buns and add a large dollop of the tahini and tabasco sauce on each bun. Arrange slices of halloumi and aubergine and top with a little rocket.

We are big fans of James and Williams recipes ever since they set up Currabinny. Don’t forget to check out their website for more great recipes.

We use cookies on our website to give you the most relevant experience by remembering your preferences and repeat visits. By clicking “Accept”, you consent to the use of ALL the cookies.
Cookie settingsACCEPT
Manage consent

This website uses cookies to improve your experience while you navigate through the website. Out of these, the cookies that are categorized as necessary are stored on your browser as they are essential for the working of basic functionalities of the website. We also use third-party cookies that help us analyze and understand how you use this website. These cookies will be stored in your browser only with your consent. You also have the option to opt-out of these cookies. But opting out of some of these cookies may affect your browsing experience.
Necessary Always Enabled
Necessary cookies are absolutely essential for the website to function properly. This category only includes cookies that ensures basic functionalities and security features of the website. These cookies do not store any personal information.
Non-necessary
Any cookies that may not be particularly necessary for the website to function and is used specifically to collect user personal data via analytics, ads, other embedded contents are termed as non-necessary cookies. It is mandatory to procure user consent prior to running these cookies on your website.
SAVE & ACCEPT